Is the sports broadcasting jeopardizing the whole sports industry? Indeed, the two most successful sports leagues in the world – the NFL and the Premier League – seem to be struggling with their TV viewership. Even if experts are blaming some external factors such as the US elections or domestic issues (Brady’s absence, anthem protests, domestic violence…) for the NFL, or the poor schedule for the Premier League, it’s hard not to worry about these figures.

“Viewership through the first seven weeks of the NFL season is down by 12 percent in the United States while the audiences for Premier League soccer matches this season, which began in August, are down by nearly 20 percent in Britain.” -The New York Times, October 2016.

These falls in viewership are just the top of the iceberg and the ongoing crisis seems to be much more serious. ESPN – the self-proclaimed Worldwide Leader in Sport – lost more than a million subscribers in the last two months of 2016 and also admitted to have lost 7 million subscribers between 2011 and 2015. In 2017, ESPN will spend $7.3 billion on Sports rights (NFL, NBA, MLB, College Football, …), more than any other US broadcaster. The main problem is that ESPN spend more and more money on TV rights each year while consistently losing subscribers. Some already crunched the numbers and are predicting that ESPN will fall by 2021, comparing the Worldwide Leader in Sports to a “dead channel walking”. What if the sport industry is at the edge of a big broadcasting revolution? Will the sports broadcasting bubble pop? Let’s discuss this question.

Recent TV deals of every major league in Europe and the USA have boomed reaching astonishing amounts. For example, the bidding war over domestic soccer in the UK ended up with a $6.3 billion deal over the next 3 seasons for the Premier League, while BT has paid an additional $1.2 billion to broadcast the Champions League and the Europa League, Europe’s elite soccer competitions. TV deals are key for every major sports league, and they account for the majority of their revenues. In European soccer, broadcasting accounts for 61% of the Italian Serie A revenues, 53% for the English Premier League, 48% for Spanish La Liga and 43% for French Ligue 1. German Bundesliga is the only soccer league considered as a textbook case with only 31% of their revenues coming from broadcasting. Likewise, the USA follows the same trend with 56% of their revenues coming from national TV deals for the NFL ($7.3 billion out of $13 billion) and the NBA ($2.7 billion out of $4.8 billion). 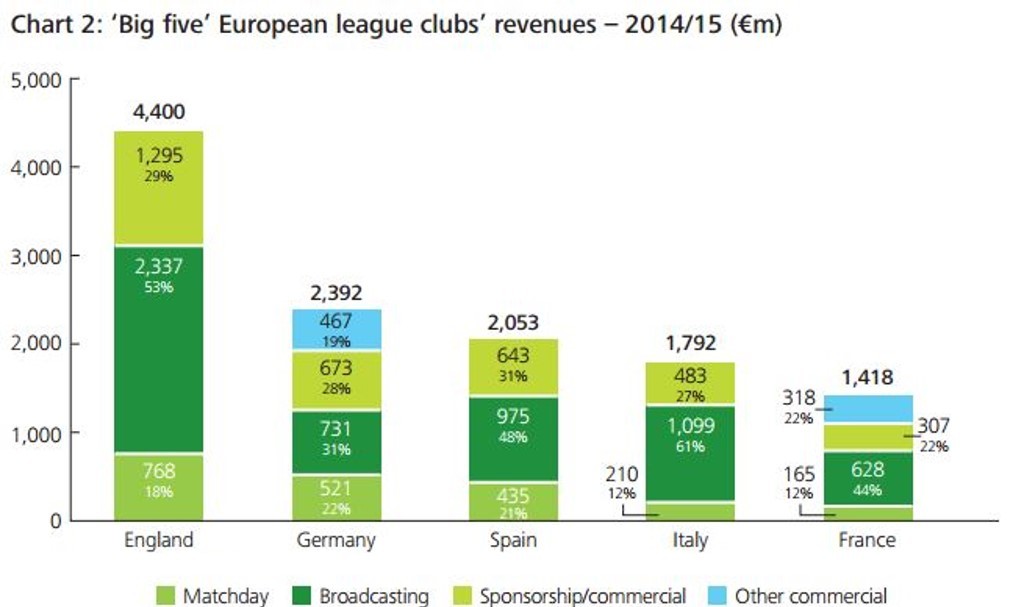 IN THE GRAPH: ANNUAL REVIEW OF FOOTBALL, JUNE 2016 CREDIT: DELOITTE

The truth is that the TV industry needs sport as much as sport needs the TV broadcasting money. Live sport is the keystone keeping the TV industry from collapsing as viewers’ attention flees to DVR’d shows and Netflix or Hulu streaming platforms. Sports programs are the last bastion of live programming. People view games in real time, meaning they actually watch the advertisements. When looking at the Top 100 most-watched TV programs of 2016, the sport’s influence is astonishing. 68% of the Top 100 programs are sport shows. The Super Bowl 50 is far ahead of the competition with 111.90 million US viewers, and only 3 non-sport shows are part of the Top 40: The Oscars Academy Awards (5th with 34.43m viewers), the Grammy Awards Ceremony (21st with 24.95m) and the 60 Minutes show (40th with 20.62m). The competition is fierce with five distinct TV channels being part of the Top 20 with distinct sports programs: CBS (Super Bowl 50), FOX (NFC Championship), NBC (NFL and Summer Olympics), ABC (NBA Finals) and ESPN (College Football Playoff Championship).

IN THE PHOTO: FAN PHOTO OF THE SUPER BOWL 50 PHOTO CREDIT: FLICKR.COM

Every recent study is on the same wavelength regarding the TV consumption decrease over the past few years. It’s all the more true when distinguishing by age group. The US quarterly TV viewing figures from Nielsen of October 2016 confirm that the younger generations watch less and less TV, with a 38% decrease for the 18-24 years old group over the last 5 years. It’s worth mentioning that these numbers also include DVR/time-shifted TV viewing such as video-on-demand.

IN THE GRAPH: US QUARTERLY TV FIGURES CREDIT: NIELSEN

“Digital advertising is not only pulling dollars from traditional media, but it’s also creating new advertising opportunities at the local and national level.” -eMarketer, September 2016.

To survive, TV channels must reinvent their broadcasting

The sports bundle business model can be simply summarized as follows: TV channels spend money to acquire exclusive TV rights from Sports competitions, while generating revenues through subscriptions and advertising. This model has long been considered as unwavering given the high barrier to entry provided by the very expensive prices to acquire TV rights and provided by the exclusivity of the content.

IN THE GRAPH: MONEY FLOWS WITHIN THE SPORT INDUSTRY CREDIT: MAX MÉTRAL

The fact is, the fans’ price sensitivity has changed a lot in the recent years with the emergence of illegal streaming as well as online content platforms. Entertainment content can now be consumed online on your computer, tablet or mobile, and the perceived value for the consumer is not as high as when TV was the only way to consume media content. Now with more and more fans cutting the cord and decreasing viewership numbers, TV channels are facing a dual threat: the less viewers, the less subscription revenue and the less advertising revenue.

“I think everybody is aware that you can no longer move at this rate. It will just collapse under its own weight.” -Maury Brown, Forbes SportsMoney.

As described by the Harvard Business Review within the article What is Disruptive Innovation: when a sector is being disrupted by the low end of the market “incumbent companies should strengthen relationships with core customers by investing in sustaining innovations. In addition, they can create a new division focused solely on the growth opportunities that arise from the disruption”. In other words, TV channels are likely to create online-based offers while keep investing in innovations to sustain their TV offers targeting the high-end of the market and the most profitable customers. We already have a glimpse on the upcoming innovations with rise of Virtual Reality, 3D and very high-quality programs such as 4K.

Social network companies are more and more interested by sports broadcasting. Indeed, their major concern is to keep their audience within the platform in order to keep selling targeting ads. In fact, Facebook, Twitter, Snapchat and the other social networks are nothing else than big advertising companies who know almost everything about their users. So in order to keep them active within their platforms, they are now beginning to broadcast sport content such as Twitter with the NFL Thursday Night Football live games, or Facebook with exclusive live content partnerships with athletes, clubs and events such as Real Madrid, Michael Phelps or the 2016 Summer Olympics.

“Advertising works most effectively when it’s in line with what people are already trying to do.” -Mark Zuckerberg, Time Magazine, July 2007.

This type of partnership can be really valuable for sports leagues in order to improve their reach and awareness to potential new fans, while TV cable broadcasters are often criticized for their small audience, such as BT in the United Kingdom with the coverage of the UEFA Champions League. In January 2017, the NFL announced an agreement with the Chinese social media giant Sina Weibo to live-stream games on the social network, including the Super Bowl. To give you a brief overview, Sina Weibo is one of the most popular websites in China with 132 million daily active users, 297 million monthly active users, and a market penetration similar to Twitter and YouTube in the United States. The second major advantage of social networks over TV channels is their ability to display one-to-one advertising to each specific viewer, making the ad highly targeted and relevant for the user and the advertiser.

TV and Social networks: a combo, not a competition

Despite the growing interest of social networks towards sports content, it’s hard to imagine a business case for them to spend billions of dollars in order to compete with TV channels in the near future with a business model only relying on advertising. The most likely case for them would be to compete on low-value packages such as Twitter with the NFL Thursday Night Football and to help leagues access potential high-growth market such as the NBA broadcasting the Warriors – Kings game on January 9th in India via Facebook (King’s owner Vivek Ranadivé is an Indian-American businessman).

As for the TV channels, it seems that the fierce competition towards sports TV rights will push them to consistently increase their bids until one – or several – of the main broadcasting networks will be forced to surrender, which may occur around 2020 with the next broadcasting negotiation cycles in the US. Nevertheless, the remaining actors will need to improve their offers with some innovations in order to compete with the cord-cutting and to keep justifying high prices. The other possible outcome would be a change in the business model such as in the UK, with Sky Sports and BT using sports content in order to attract customers to their broadband, mobile, telephone, internet and TV bundles.

Leagues broadcasting their own content: a structural and conceptual internal conflict

“The football industry have traditionally followed a sponsorship model over an advertising model.” -Joaquim Cardona, Head of Digital Business at FC Barcelona.

As explained by Joaquim Cardona, the Head of Digital Business at FC Barcelona, the football industry and, by extension, the sport industry has been created on a sponsorship model (see graph #1) over an advertising model. Sponsors give money to Leagues, Clubs and Athletes to partner with them in order to benefit from their image to promote their products or services. Having leagues broadcasting their own content will force them to overcome “many structural and conceptual internal conflicts with the sponsorship model”. It’s fair to think that as long as selling broadcasting rights continues to be the major revenue stream for sports organizations and if the audience provided is still big enough to sustain the sponsorship model, it’s unlikely sports leagues will become the sole broadcasters of their own product. But if it makes business sense, get ready for a whole new game.

There is no denying that sports TV rights are in the middle of a speculative bubble where TV channels are desperately trying to compete for the best live content available, sport. Nevertheless, despite this fierce competition, there is no clue that the whole system will explode. Some actors may disappear due to the cord-cutting and the increasing TV rights price, but the remaining ones will then be in better positions. The sports on TV is unlikely to disappear in the near future, but the sports TV right will soon reach a plateau unless TV channels find an innovative way to re-invent their business model around sport content.

Author’s note: This is a personal article. Any views or opinions represented in this article are personal and and do not represent those of people, institutions or organizations that the author may or may not be associated with in professional or personal capacity, unless explicitly stated.

View all posts by maxmetral